View source
“This is an ancient Minkan Amulet of Protection. You-You cannot harm me.”
— Clutch Powers to Aspheera

The Amulet of Protection is a compass-shaped amulet of the Minkan Tribe.

Among all of the artifacts in the Artifact Room, the amulet appeared on the ground, and was sucked unto the Chest Vortex until the vortex was destroyed. The Amulet of Protection was picked up by Clutch Powers to keep. 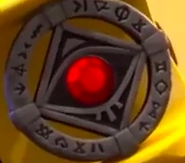