The Castle of Ice (also known as the Ice Castle or the Castle of the Forsaken Emperor) is the castle fortress and headquarters where the Blizzard Samurai reside.

Team up with LEGO® NINJAGO® heroes Lloyd FS, Cole and Akita and get set for a chilling battle at the Castle of the Forsaken Emperor! Beware of the massive Forbidden Ice Dragon guarding the castle. Dodge shots fired from the ice castle’s crossbow and the ice tower's spring-loaded shooter. Battle evil General Vex and his Blizzard Samurai warriors—and don't get trapped in the ice prison! Create a Spinjitzu tornado with Lloyd FS to reveal the Ice Emperor's throne. Can you grab the emperor's Scroll of Forbidden Spinjitzu and end the freezing winter in the Never-Realm?[1]

At some point in time, the Blizzard Samurai came into existence and begin their reign. While in the Never-Realm, they created the Castle of Ice in to act as a base.

Zane had a dream of the castle and the Blizzard Samurai. 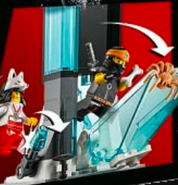 An unspecified pendulum, in set form in the Castle of Ice.
Add a photo to this gallery

The Castle of Ice in Zane's dream.

The castle seen in Spirit Smoke.

Cite error: <ref> tags exist, but no <references/> tag was found
Retrieved from "https://actionpedia.fandom.com/wiki/Castle_of_Ice?oldid=58755"
Community content is available under CC-BY-SA unless otherwise noted.