View source
“What you call "mud" is concentrated evil. A Dark Matter that with one drop could make a man's heart turn as black as night.”
— The Overlord to Garmadon

This section of Dark Matter includes some or all content from the "Dark Matter" article from the Ninjago Wiki, a FANDOM project.

Dark Matter is a violet material commonly mistaken for mud mined from Digger's Deep. In its natural state, it has light purple dots and a visible glow—when refined for weapons use, it becomes almost black in coloration. It is usually handled in trays or the Garmatron. Dark Matter is used in a shell, and it bears resemblance to regular stone.

Ignacia under the influence of Dark Matter.

Jamanakai Village under the influence of Dark Matter. 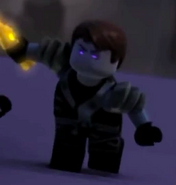