View source
“So you know about how the First Spinjitzu Master created Ninjago, but what if I were to tell you in order for there to be light, there must be shadow, and within shadow, there is darkness. The blackest of darkness that existed from the very beginning.”
— Misako to the ninja

Darkness (also called the black cloud of destruction) is evil or the partial or total absence of light.

This section of Darkness includes some or all content from the "Darkness" article from the Ninjago Wiki, a FANDOM project.

Description
This template is used to mark sections of content from other sites.
Syntax
Type {{licensing}} on the section of the article needed to be licensed.

Dark Matter, a substance of Darkness. 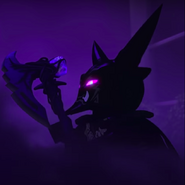