Ghost Blades are blades wielded by the Ghost Warriors.

Wrayth's chained whip does feature a single ghost blade at the end of it. He would utilize this as his primary weapon after being freed from the Cursed Realm. All the ghost blades were presumably lost upon the Cursed Realm's destruction. Ghost Ninja Ming and Cowler also use one.

They appear to have the power to transform others into ghosts, as Wrayth‘s ghost blade turned Cole’s walliper into a ghost. 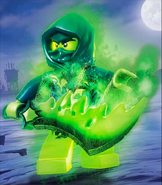 Ming with a Ghost Blade.

Morro with a Ghost Blade.

Bansha with a Ghost Blade.
Community content is available under CC-BY-SA unless otherwise noted.
Advertisement