View source
“
In my journeys, I have discovered a power that dwarfs your Formling abilities, an Elemental Power.
— Vex to the Formlings, after he saw the power of Ice
„

This section of Ice includes some or all content from the "Ice" article from the Ninjago Wiki, a FANDOM project.

The symbol of Ice is a wolf. This likely symbolizes Zane's loyalty to his friends, as a wolf would be loyal to its pack. 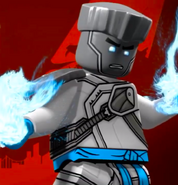 The Elemental Master of Ice using a Cryo Blast.

Boreal continues to freeze the village.