View source
watch 01:25
Jurassic World: Dominion Dominates Fandom Wikis - The Loop
Do you like this video?
Play Sound
“Behold his treachery! One moment he speaks of friendship, and the next he tries to steal your scepter.”
— Vex

Crashed to the ground

The ice scepter is a naginata used by Zane as the Ice Emperor, powered from the Ice Scroll.

At an unknown period of time in Camelot, Merlin the Magician created a scepter with the remnant of a Key-Tana and created his scepter, which he used to protect Camelot from danger. He eventually fought off the Raven King with it, but it fell into a portal into an archaeological site, and it eventually was founded by archaeologists, who put it in the Explorers Club. When Zane was banished to the Never-Realm, he became amnesiac under Vex. Zane became the Ice Emperor and froze the staff on his hand, making it a scepter. When Lloyd saved Zane, he broke the staff and peace was restored to the Never-Realm.

This section of Ice scepter includes some or all content from the "Ice scepter" article from the Ninjago Wiki, a FANDOM project. 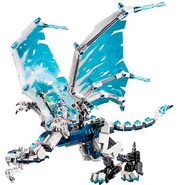 The Staff of Ice is a Scroll of Forbidden Spinjitzu.

Akita nearly gets frozen by the scepter.

Zane prepares to destroy the Scroll of Forbidden Spinjitzu.

The scepter destroyed.
Community content is available under CC-BY-SA unless otherwise noted.
Advertisement