Judaism is one of the world's major religions, which is a monotheistic faith alongside Christianity.

Practitioners of Judaism are known as Jews, the central holy scripture is called the Tanakh, and a synagogue is the local house of worship for Judaism. A common symbol of Judaism is the Star of David. 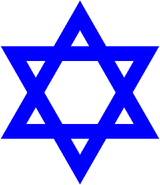 The Star of David, the common symbol of Judaism.