View source
“
A beginning is a very delicate time. Know that this is the year 10191. We, the Anunnaki, travel between layers of the many universes. The time of Nibiru has come. The moment the planets align, the evil one's strength will be the greatest. Free in your world, he will grow more powerful every second. He will destroy your city, your planet, your universe.
— Nova
„

The Nibiru cataclysm is a well-known legend in Babylonian history that will occur in the 10th millennium, when a tenth planet will destroy the first nine aligned planets.

In the tenth millennium, the nine planets will align and the tenth planet (Planet X) will destroy the other planets. The Evil Entity will be released by his children and he will establish supreme leadership of the universe with his evil Anunnaki until one destroys him. 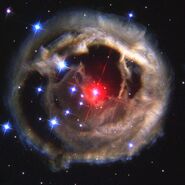