The One Trillion Realms

Ogaji is one of the One Trillion Realms and the birthplace of the Heart of Sorna.

The central region in this realm is the smallest but the most populous of all realms. The Temple of Ogaji is in this region, outside of the city. It is shaped like a dragon's head, thus that is how it got its name.

This region of Ogaji is mostly filled with spectacular views of woods and temples, but all of them are deserted.

Most volcanoes erupt in the volcano region.

The southern region of the kingdom is similar to the Desert of Doom and the Sahara Desert, except that barely anyone survives there. It is the biggest region in Ogaji.

The northern region of this kingdom is frozen in an eternal winter.

The southwest region is where most Ogajians and visitors lose their lives, as it is known to be dangerous.

The Great Sea often refers to the Endless Sea in Ninjago, or the Pacific Ocean in the World. The Great Sea is currently poison, caused by the Venomari years ago when they came into this realm. Chang's Island is currently in ruins, along with most of the other locations in the sea.

Secrets of the Dark Spinjitzu

Zane mentioned this realm as one of the realms created by the First Spinjitzu Master.

The Ninja travel to this realm to find the Forge of Ogaji, one of the Realm Forges that they need, which is guarded by the Lightning Emperor and his Lightning Samurai.

This section of Ogaji is a stub. You can help Actionpedia by expanding this section. 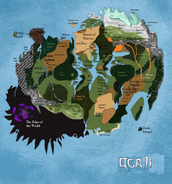