Season 3: Secrets of the Dark Spinjitzu

The Oni Mask of Vengeance is an Oni Mask which turns the user into a master swordsman with two additional arms and gives the user the ability to absorb and deflect other people's powers.

Colored drawing of Mr. E holding the Oni Mask of Vengeance and a red twin katana. 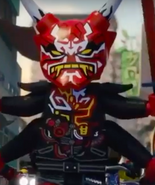