Season 3: Secrets of the Dark Spinjitzu

The Oni Masks were powerful masks from the First Realm, masks created by three Oni warlords, with unique individual abilities derived from the warlords.

When all three are united together at the Temple of Resurrection, the user can call an individual with Oni blood (full-blooded or hybrid) back from the Departed Realm. In addition, hair from the Oni's wife (in this case, Misako), son (in this case, Lloyd), and brother (in this case, Wu) is necessary to achieve the summoning.[1] Harumi used them to resurrect Garmadon's evil side.

At some point in time, the three Oni Masks were created in the Realm of Oni and Dragons by three Oni warlords. They would eventually end up in the realm of Ninjago through unknown means, where they would be separated around the island. Many believe that when the Oni left, they hid the masks.

This section of Oni Masks includes some or all content from the "Oni Masks" article from the Ninjago Wiki, a FANDOM project.

The Oni Mask of Deception, used by Killow.

The Oni Mask of Vengeance, used by Mr. E.

The Oni Mask of Hatred, used by Rumi.

The Oni Mask of Hatred, used by Harumi. 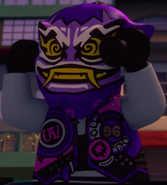 The Oni Mask of Hatred, used by Ultra Violet.
Add a photo to this gallery

Retrieved from "https://actionpedia.fandom.com/wiki/Oni_Masks?oldid=54412"
Community content is available under CC-BY-SA unless otherwise noted.