Next state in statehood

Rhode Island is the thirteenth state to be admitted into the United States. 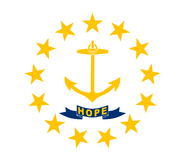