The Sword of Sanctuary is a mystic sanctified sword that can foresee your opponent's next attack.

As a weapon, the Sword of Sanctuary can be used in combat. It can also be used as a tool to cut through obstacles. 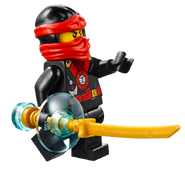 In set form wielded by Kai.

Add a photo to this gallery
Retrieved from "https://actionpedia.fandom.com/wiki/Sword_of_Sanctuary?oldid=53282"
Community content is available under CC-BY-SA unless otherwise noted.