View source
“Reply. Of course I'm at the hospital. My hair is sick. Haha. Send.”
— Kai in a Chirp

Twitter (also known as Chirp) is a social media site on the Internet. 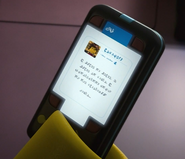