View source
“Whether you are on the right or on the left, a Democrat or a Republican, there is never a justification for violence. No excuses, no exceptions. America is a nation of laws.”
— Donald Trump about the United States

The United States of America

The United States of America (often abbreviated USA) is a country in North America which, in 1936, comprised of 50 states and 48 semi-independent states. 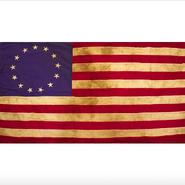 Harry Gilbertson performing figure eights around a boombox and a flag of the United States during Plainview's Most Talented.