Vandalism is an act involving deliberate destruction of or damage to public or private property.

Vandalism has been done on many wikis, including this one.

Note: These users are not divided up into groups, even though some are confirmed as sockpuppet groups.

Murdoch Wesley and Gervaise Sylvie vandalized wikis before the Actionpedia. The Master of Water in some other wiki now closed, pretended to not know who Gervaise Sylvie is, but was turned out to be her.

The Growth of Vandalism

Sons of Shen vandalized by Emmet. 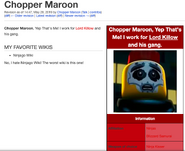 Vandalism on page Min-Droid in the Ninjago Wiki by Master of Energy/Chopper Maroon.

A headshot of Emmet Brickowski uploaded by some user on this wiki.
Community content is available under CC-BY-SA unless otherwise noted.
Advertisement