View source
“To become Water, you must find its qualities within yourself. While earth is strong and air is fluid, Water can be both, strong and fluid. Over time, it's strong enough to carve this rock. Or if I use my cup to stop its flow, it can adapt. It's flexible, shapeless.”
— Wu to Nya

Water is wet and transparent, usually in bodies of them or in a bottle used to drink.

This section of Water includes some or all content from the "Water" article from the Ninjago Wiki, a FANDOM project.

The symbol for Water appears to be the head and wings of a phoenix, with the wings resembling waves of water. This likely symbolizes Nya sacrificing Samurai X (the symbol is the phoenix) and joining the Ninja, eventually creating humongous waves of water. 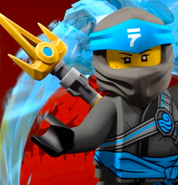