View source
watch 01:25
Jurassic World: Dominion Dominates Fandom Wikis - The Loop
Do you like this video?
Play Sound
“Nya, you make me so happy everyday. When we're not together, I miss you so much that it feels like part of me is missing. Will you be my Yang?”
— Jay to Nya

The Yin-Yang promise was a sacred love-related tradition practiced in Ninjago.

Yang, the active male principle of the universe, characterized as male and creative and associated with heaven, heat, and light.

Yin, the passive female principle of the universe, characterized as female and sustaining and associated with earth, dark, and cold. 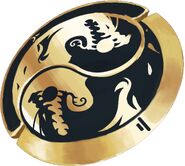